When U.S. cities erupted after the death of George Floyd, D.C. Mayor Muriel Bowser was in the vanguard of the protests, renaming a section of downtown Black Lives Matter Plaza, and painting the name in letters on the street so huge they could be seen from space.
Thursday, however, Bowser awoke to those same BLM protesters yelling outside her home, denouncing a “D.C. police murder of a Black Man,” and demanding the mayor fire Police Chief Peter Newsham.
18-year-old Deon Kay had been shot and killed Wednesday afternoon in an encounter with cops. While this was the fifth shooting by D.C. cops… Read More in Real Clear Politics 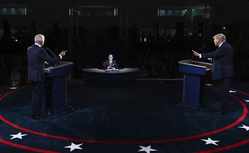 After Kenosha & Portland, Why Aren't We Talking About Guns? Judge Barrett and Your Health Care Debate Was a Missed Chance to Detail Mail-In Vote Flaws