In a recent Washington Post op-ed, three retired generals, Paul Eaton, Antonio Taguba, and Steven Anderson warn of a supposedly impending coup should Donald Trump be elected in 2024.
The column seemed strangely timed to coincide with a storm of recent Democratic talking points that a re-elected Trump, or even a Republican sweep of the 2022 midterms, would spell a virtual end of democracy.
Ironies abound.
From Election Day in 2020 to Inauguration Day 2021, we were told by the Left that democracy was resilient and rightly rid the nation of Trump.
The hard Left, for one of the rare times in U.S…. Read More in Real Clear Politics 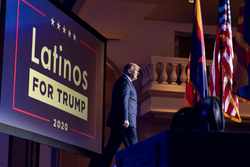 And Then There Were None

Why Federal Legalization of Cannabis Is Finally at Hand