It may seem strange, but sometime after learning of the death of former Vice President Walter F. Mondale, I found myself thinking about elephants, and not because a pachyderm is the symbol of Fritz Mondale’s lifelong opposition — the Republican Party. And not because elephants are descendants of huge creatures from the dinosaur era, although younger readers might view folks like Mondale and me dinosaurs because of our age and progressive ideals; it can be argued that Joe Biden’s election as president, and his address to Congress Wednesday evening, show that such principles are very much… Read More in Real Clear Politics Court Packing Is Radical. Dems Must Say Where They Stand. 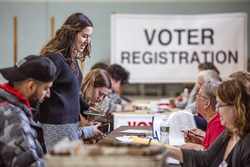 Trump and the global reach of right-wing conspiracy theories

Is the Stock Market Telling Us That Trump Will Win?

Who Owns the Future? Dems or GOP?