The investigative journalists over at The Daily Beast report that Madison Cawthorn, the North Carolina Republican who will soon become the youngest member of Congress in American history, “has admitted he tried to convert Jews and Muslims to Christianity.”
So what?
As a Jew, I’ve had several Christian friends try to turn me toward Jesus — Lutherans, Catholics and Evangelicals. Though denominations seem to adopt different philosophies on how best to proselytize in a secular world, they have all been exceptionally polite about it.
I assume that they wouldn’t be very good Christians if they… Read More in Real Clear Politics 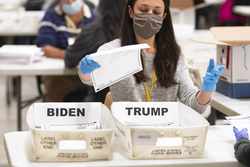 What If Biden Were Seeking Recounts?

In Kenosha, Biden To Test His Promise To Unify the Nation