I wish I could be a Cheney fan. I really do. Rep. Liz Cheney has conducted herself honorably for the past nine months. Her courage in telling the truth about the election and the insurrection of Jan. 6 has been punished by the Republican conference, which booted her from leadership and replaced her with the lying, scheming Trumpist, Rep. Elise Stefanik. Former President Donald Trump is apparently working feverishly to unseat Cheney from Congress altogether, and his lickspittle lieutenants are joining the effort.
The invertebrate minority leader, Kevin McCarthy — who, let’s recall, declared… Read More in Real Clear Politics Media Bury Biden’s Sins to Cast Him as a Saint 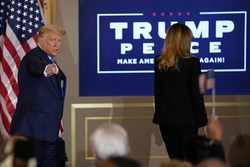 As the Counting Continues, the Legal Wrangling Ramps Up

The White House's Double Dose of Tough Talk on Cuba

Pakistan Claims to Crack Down on Non-Existent Uyghur Terrorist Group

France, Spain and more get ready for international tourists

When Did the Supreme Court Do Better?